EDA Profile of Yerba Buena Center for the Arts

Dance companies realize the potential value of converting “crossover” fans from the visual arts field. What methods work to enlighten new audiences for visual art—to build their understanding of art that is on exhibit? Can a critical pedagogy that is successful in visual arts be adapted to inform and educate audiences about dance? 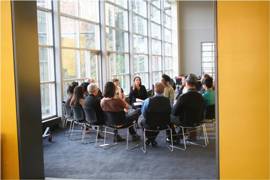 Dance Savvy had two main components, which were accompanied by performances:

To test this pilot, twelve participants in each workshop were exposed to the work of dance artists (including Ralph Lemon, Sankai Juku, Jess Curtis/Gravity, and Lemi Ponifasio/MAU). Learning about concepts such as time, space, and line, the participants were encouraged to form opinions, deepen critical thinking, and confidently express their evaluations. It was crucial that curriculum remain flexible and modular; a single, rigid curriculum would put undue limitations on Dance Savvy.

Research and development were key to creating and testing this new model. Prior to the program’s launch, a think tank held in May 2010 was integral to helping YBCA “envision a variety of creative approaches for implementing what was, at that time, a relatively undefined concept.” Working across departments, with YBCA’s Community Engagement and Performing Arts staffs, the collective knowledge and creativity brought to the table from two different points-of-view was invaluable. Then, after each Dance Savvy activity, YBCA conducted post-event online surveys to gauge whether or not participants’ expectations were met, how the program might be improved, and participants’ overall satisfaction with the Dance Savvy program, as well as summative questions about attitude and behavior change as a result of participating in the Dance Savvy program.

YBCA documented the changes it observed among Dance Savvy participants, as evidenced by its research and staff observations.

Staff was inspired by the Pilot’s ability to change the participants’ attitudes toward contemporary dance, with the evaluation results noticeably improving, when 55% felt “a lot better equipped” to appreciate contemporary dance in the future. Throughout the Pilot, participant retention rates and satisfaction levels remained high, as did their interest. For example, one participant who was a visual artist felt that through Dance Savvy the “veil has been lifted” to reveal the world of performance.

During the pilot, YBCA witnessed the “creation and flourishing of an invested community of participants that grew dramatically more curious, open, and empowered to investigate new dance forms,” according to staff This close-knit group sat together at performances, interacted during Workshops and Downloads, and had animated discussions during shared dinners. Social aspects became more beneficial and YBCA expects that these connections will continue. Finally, the participants’ attention span was held throughout the events, even when they were held on the same day.

YBCA felt that the download was the sleeper hit of the Dance Savvy Pilot. The effect of communal discourse after a shared artistic experience was powerful and revealed how engagement with dance can go deep with minimal resources. Additionally, Downloads were an excellent platform to revisit themes and topics addressed in the preceding Workshop.

YBCA is still considering the balance in contextualization and observation/interpretation within the curriculum. YBCA wanted to explore dance through deep observation, without always providing explicit explanations for what a dance piece means. They were also committed to investigating different, creative ways to prepare the body and the mind for experiencing a work. While these approaches were successful, participants requested more contextual information; for example they were particularly curious about was how a dance season is curated.

YBCA noted the amount of human and other resources needed to pilot a new program. It took considerable time to research, plan, implement, and manage a pilot of this scope. In institutionalizing the program, YBCA would likely need to identify a single staff member who will assume a primary role. Dance Savvy will become a core, foundational engagement program for YBCA audiences to explore visual art and performance.

YBCA shares four key lessons from the Pilot, which should be useful to other organizations that are considering adapting it. If given the final, adaptable, modular curriculum, other institutions will be able to replicate Dance Savvy, preferably in consultation with YBCA staff, who can help tailor the program to their specific situation. YBCA’s lessons are as follows:

The extensive materials below will allow peers to understand and consider replicating the program.

See also the content about this project that was presented during Dance/USA’s EDA Learning Exchanges, including video presentations from the grantees themselves about their project, as well as timelines, budgets, and other details.