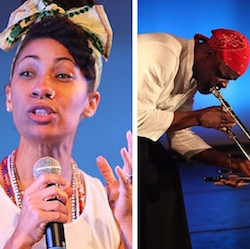 Goal: The goal of the Summer Leadership Institute (SLI) Opening Performance was to show audiences the power of dance to illuminate matters of importance and inspire dialogue and action. UBW sought to get audience members to actively participate in an Embodied Learning Practice that used breathing, movement and connecting with one's body to physically process difficult concepts.

For UBW, audience engagement is viewed through the lens of partnership, collaboration, and utilizing dance to create dialogue within the community in ways that will inform social change. This was exemplified in the SLI opening performance that was held at the Contemporary Arts Center in New Orleans with a capacity audience of 250 people and live-streamed by HowlRound TV to a national online audience.

The multi-media performance began with a video from Michelle Alexander, author of "The New Jim Crow: Mass Incarceration in the Age of Colorblindness" and continued with performances from UBW’s Company members and "Voices from the Bush," our community of national and New Orleans-based artists including special guests: poet and activist, Sunni Patterson; trombonist, Craig Harris; and performer Rhodessa Jones. The performances were profound, beautifully uncomfortable pieces spoke to the issues of mass incarceration, police brutality, and civil rights.

UBW utilized dance, music, and film during the multi-media production to introduce the theme of the SLI ("We Who Believe in Freedom Cannot Rest: Organizing for Racial Equity") to the audience, which included SLI participants, New Orleans residents, and online viewers. During the opening performance, the audience actively participated in UBW's Embodied Practice of breathing and connecting with one's body in response to the performance.

Target Audience: UBW's target audience is often women, artists, and communities of color. Much of UBW’s New Orleans audience includes African-Americans and women of color ranging from 20-60 years of age.

Nature of Audience Engagement: During the SLI Opening Performance, the in-person and online audiences actively participated in UBW's Embodied Learning. Embodied Learning is a method that uses movement to physically process concepts. It includes the practice of breathing, movement, and connecting with one's body in response to the performance and was guided by a UBW company member and a trainer with the People's institute for Survival and Beyond.

Location: In the theater

How Many Staff: The UBW company (7 members), Visioning Partner/Founder, Jawole Willa Jo Zollar, facilitators from the People's institute for Survival and Beyond, and Voices from the Bush participated in the opening performance.

Marketing for Program: The program was marketed through the networks of UBW, Junebug Productions, and the New Orleans Contemporary Arts Center. Platforms included websites and Facebook.

Past Iterations: The SLI has been held a total of 16 times. The opening performance took place several times before 2009.

What works? The experienced guidance provided by the UBW company member and the facilitator from the People's Institute helped audience members to embrace the Embodied Learning practice,

Performances Where Offered: This program was offered as part of the SLI. The opening performance got attendees rooted in the topic of the SLI, mass incarceration. The performance provided context for the SLI, a model of collaborative art making and a model of how to use dance to create dialogue that addresses social justice themes.

Continuing Program? We are exploring a model that will extend the engagement experience with a cohort of audience members over an extended period of time.

Event Formats Participatory Engagement Methods: involving the audience in activities such as dancing or choreographing