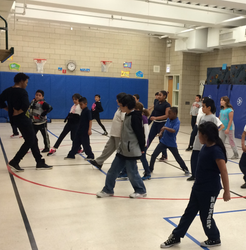 Goal: Stomping Grounds aims to engage new audiences by offering culturally relevant material performed by artists from Chicago neighborhoods, alongside other artists from around the city. The program is a collaboration with a core group of percussive dance/arts companies based in culturally and geographically diverse neighborhoods across Chicago. Goals are: 1) to build new audiences and life-long engagement through dance-centric/multi-arts events at multiple cultural centers; 2) to support authentic, mutual cultural appreciation and cultural pluralism; 3) to build community within the dance sector and between diverse neighborhoods while fostering a vibrant and unique cultural sector, and economic development; 4) to drive tourism; and 5) to increase participation in dance education programs for all ages.

Time of Year Offered: The festival is presented from April through June each year.

Target Audience: The festival’s performance audiences reflected high levels of cultural diversity in 2016, as 41% of respondents were African American and 24% were Latino/a or Hispanic. Partner school populations are more than 90% African American or Latino/a, with more than 90% of the students coming from families determined to be low-income according to the Illinois State Board of Education.

Is the program for kids? Education and outreach programming is described under “Describe your program.”

Nature of Audience Engagement: The 'performalogue" program format involves a performance/rehearsal with discussion. During the performance, artistic directors and artists shared historical/cultural context with the audience, and post-performance, directors and artists engaged the audience in a moderated Q&A session. We had entire families dancing/drumming together at the Irish American Heritage Center and the Garfield Park Conservatory.

How Many Staff: Seven employees, eight consultants, interns, and volunteers.

Cost for Program Participants: The Chicago Rhythm Fest finale concert is a ticketed/paid performance, with tickets as low as $15. All other events are free.

Attendance To Date: Over the festival’s two years, 12,000 young people have participated.

Past Iterations: The festival has been offered twice, once in 2016 and once in 2015.

What doesn't work? CHRP aims to confirm partners sooner to ensure that each performing company and venue is featured throughout the entire marketing/PR campaign. The requirements of “partnership” will be defined more precisely to collaborators.

Past Research on Program: CHRP conducts surveys at each festival event. Sixty percent of performalogue survey respondents (338 surveyed) had not previously attended a CHRP event. See demographics above. 34% of those surveyed indicated they heard about the performalogue from a friend, while 24% heard about the event from an eblast. When asked whether they would consider purchasing a ticket to one of the Stomping Grounds companies in the future, 88% noted one or more companies of interest (each company received interest from at least 40% of total respondents).

Ideas for Working with Young Audiences In school programs