GETTING CLOSER TO DANCE: Going to the Dance; and That's a Rap: The Joyce Theater 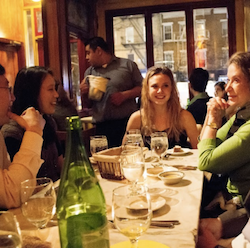 Program Name: GETTING CLOSER TO DANCE: Gong to the Dance; and That's a Rap

Goal: Goals include enabling audiences to more fully experience, better understand, and derive meaning from dance. Principals of aesthetic inquiry process inform the project whose long term goals include fostering continued interest by audience members in participating in knowledge-building activities and sharing opportunities with peers as well as with attending performances.

Time of Year Offered: Early in season (Going to the Dance) and more towards the end of the season (That's a Rap); fall/winter and spring/summer season

GETTING CLOSER TO DANCE: Going to the Dance; and That’s A Rap are performance events followed by facilitated discussions. They are part of a series of three interrelated activities providing audience members with opportunities to more fully experience and understand dance. The activities equip audiences with “tools” to unlock the meanings found in what they see on stage. Participants practice describing what they see, analyzing and interpreting throughout the process.

Going to the Dance: 30 participants, broken into 5 groups of six, attend a carefully chosen performance with a host from the dance field. Hosts include choreographers, critics and writers, designers, dancers, and directors. A pre-performance meet and greet with food and drinks serves as an icebreaker where hosts and audience members meet one another. Following the performance, they discuss their responses to the performance over drinks/dinner in The Joyce’s Chelsea neighborhood. This introductory experience aims at providing a comfortable setting for audience members to interact with their peers and talk about dance with a knowledgeable facilitator. Reflection prompts placed in ticket envelopes to consider while viewing the performance provide a framework to aid attendees in describing and discussing the performance. Hosts are asked to encourage participants to describe, taking a first step into aesthetic inquiry process. A multi-media Resource Portfolio provides contextual materials on the performance.

That’s a Rap: Approximately, 30 audience members are accompanied by two teaching artists and Joyce staff (from education and marketing departments) to a performance followed by a gathering at a reception space in the Chelsea neighborhood. TAs facilitate a group discussion about the evening's performance gently employing the aesthetic inquiry procedure of describing, analyzing, interpreting. For the majority of attendees this is the third and final event in a series of three interrelated events: Going to the Dance (above), Your Dance Score (separate database record) and That’s a Rap. The group now knows each other, the TAs and Joyce staff. They have “practiced” describing at Going to the Dance and have previously been introduced to the critical response of describing, analyzing, and interpreting. A multimedia Resource Portfolio providing contextual materials on the performance augmented the experience. Participants in all three events appeared to be more comfortable with speaking about the performance having been “let in”.

Number of Participants: 57 people during the year; 30 in the fall/winter and 27 in the spring/summer seasons.

Target Audience: We reached for a diverse group. The age of the group spanned the mid-twenties to mid-eighties; largely female and largely white. Most had some exposure to dance and all expressed interest in becoming more comfortable and knowledgeable.

Nature of Audience Engagement: Participants viewed live performances, viewed videos, read contextual materials, discussed and asked question of each other and of a variety of "experts" in the field. They socialized, ate and drank refreshments with other participants and with members of the field. The audience provided verbal and some written feedback.

Location: At The Joyce Theater and nearby restaurants in The Joyce's neighborhood of Chelsea.

Program Cost: The approximate budget for Going to the Dance is $6,470 (involving 30 participants and 5 hosts). This includes a $250 fee for each host; $150 for on-site pre-show meet-and-greet; $3,000 for off-site post-show dinners; $1,600 for performance tickets; and $470 for the involvement of two teaching artists. The approximate budget for That’s a Rap is $5,850 (involving 30 participants and two teaching artists) including $3,000 for off-site post-performance event; $1,600 for performance tickets; and $1,250 for teaching artist fees.

Marketing for Program: Email invitations were sent to single ticket buyers who had attended one Joyce Theater performance in the previous year. Groups were registered on a first come, first served basis.

Cost for Program Participants: Free in the first year.

Past Iterations: We have offered two of each event in this first year.

What works? The personal invitation from The Joyce to attend hosted performances was immediately engaging to audience members. (The offering was free in its first year.) Having the opportunity to meet members of the dance field made them feel special---like insiders. Resource Portfolios, offering written, visual, audio materials with varied kinds of information worked as did Reflection prompts. A number of participants made mention of how interesting and informative the materials were.

What doesn't work? Finding the right/appropriate/affordable places for post-performance dinners and receptions was challenging. The Joyce's own space is not able to accommodate this. We found two spaces which provided relative privacy that worked to varying degrees. Proximity to the theater, affordability and some degree of privacy were considered as priorities when offering this event outside of the main venue. Identifying hosts who are representatives of the range of workers in the field field and capable as discussion facilitators that are willing and able to encourage audience members to talk was another challenge.

Performances Where Offered: Only selected performances.

Past Research on Program: Action research was conducted throughout the year by an outside observer.

Continuing Program? We hope to continue all or parts of the series in the upcoming year if it can be budgeted. We are weighing options for how to present it to audiences.

The experience of working on the series in the open manner that has been encouraged and supported by EDA has been extremely valuable, as has the participation in a learning community with colleagues. The project encouraged us to question and to build in time for reflection even when we were pressured. It brought different department areas together to work over a sustained period of time. There was generally a good feeling among all staff and a willingness to contribute time to the project. This will impact our practice in many areas in the future.