The X-Process: Conversations with the Artists : BalletX 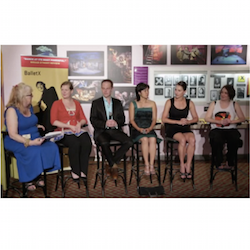 Program Name: The X-Process: Conversations with the Artists

Time of Program: evening/afternoon with performance

Goal: Conversations with the Artists provides audiences with a glimpse into the creative process behind each BalletX production through a pre-performance Q&A discussion. Moderated by a leading dance critic, these conversations ask BalletX’s guest choreographers and artists to reveal the inspiration and artistic decisions that went into creating their works. Additionally, BalletX’s Artistic Directors explain their curatorial choices in selecting the choreographers and works of a given program.

Time of Year Offered: throughout the season at all performances

Conversations with the Artists is a pre-show Q&A discussion with BalletX’s guest choreographers and artistic directors that is moderated by a leading dance critic. As an outsider to BalletX, the dance critic directs the conversation by asking questions of all parties that reveal the creative and curatorial decisions behind the works on the evening’s performance. Held in the theater lobby, the conversation engages all audience members as they arrive for the performance. Audience members have the opportunity to ask them their own questions of the artistic panel as well.

An edited, 30-35-minute version of the live event is shown before subsequent performances, as well as during intermission. BalletX also posts the video online (on the BalletX website, blog, and social media) within 24-hours in order to make the conversation available to a broader audience.

Number of Participants: Conversations with the Artists tends to draw an initial audience of approximately 40-45 attendees opening nights. Because the event is held in the theater lobby, guests continue to trickle in and listen up until doors are opened to the theater. The video replays draw smaller initial crowds of approximately 5-15 people, but also draw attention as more people arrive. The video reaches more people when it is replayed during each show’s intermission, as well as online on the company’s blog.

Target Audience: Conversations with the Artists is intended to enhance the dance-going experience for all BalletX audiences. In making the conversation available by video and social media, the company gives audiences an opportunity to learn about dance inside and outside the theater.

Location: Conversations with the Artists takes place in the lobby of The Wilma Theater.

How Many Staff: In addition to BalletX’s Artistic Directors, who participate on the panel, Conversations with the Artists requires: 1-2 tech/production staff for setup of audio/video equipment in advance, 1 volunteers to handle the microphone during the audience Q&A, 1 contracted videographer, 1 staff member to oversee logistics and facilitate the inclusion of the video in social media.

Marketing for Program: BalletX markets Conversations with the Artists in several different ways. Information on the program is included in the program book, lobby boards, monthly newsletters leading up to the event, dedicated e-blasts, series print materials, press release and season brochure, as well as on the BalletX website, on The X-Blog (Tumblr) and via BalletX’s social media outlets (Facebook, Twitter, Instagram).

Past Iterations: Conversations with the Artists has occurred twice so far—during the BalletX Fall Series 2013 and Winter Series 2014.

What works? Conversations with the Artists was extremely successful in providing audiences with insight into the creative and curatorial processes. Audiences remained captivated by the live conversation, and reports of online audiences have come from as far as Germany. Having an educated moderator who stayed on focus and led the discussion was particularly helpful as it propelled the conversation forward. Our moderator, Elizabeth Zimmer, prepared herself in depth through preliminary one-on-one phone interviews with each of the panel participants so that she could ask specific and targeted questions. Although it sometimes interrupted the flow of the conversation, it was important that Elizabeth repeatedly introduce the guest panel so that newly arrived audience members could follow the conversation. Good audio coverage is very crucial to keeping audiences focused during the conversation.

What doesn't work? We were very fortunate that Elizabeth Zimmer was very good about talking about dance in a way that did not make audiences feel alienated by lingo. Be careful of being too esoteric. It’s important to communicate with your theater staff and house manager to coordinate timing of the event, especially when it is held in the theater lobby.

Performances Where Offered: Conversations with the Artists was offered for all of our performances: live on opening night and video replay on subsequent performances.

Past Research on Program: BalletX will collect audience feedback at the conclusion of the 2013-2014 Season.

Continuing Program? BalletX intends to continue this program through the end of the 2013-2014 Season and into the 2014-2015 Season.

We are working out some technical difficulties related to this field. Check back by late October for any additional comments provided by this EDA grantee.
Please note that Supplemental Materials for many of the grantee projects are available via Google Drive, at this link:
https://drive.google.com/a/forthearts.org/?ddrp=1#folders/0B4BGrfT7MxUWcFd3eW9MaXZLek0