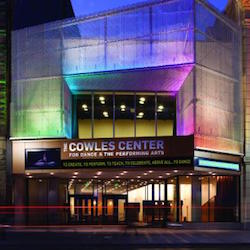 Time of Program: During evening performances

Goal: These partners are working together to transform "siloed" audiences, or those currently divided amongst their companies, into audiences for the broader dance community, and ultimately transform fans of dance into ambassadors for the art form.

The Cowles Center and its consortium partners (ARENA Dances, Black Label Movement, James Sewell Ballet, Minnesota Dance Theatre, Ragamala Dance, Stuart Pimsler Dance and Theater, Zenon Dance Company, and Zorongo Flamenco) believe that the most loyal and sophisticated dance audience is one that is fully engaged with the field at large and can enjoy multiple types, genres, and companies. The consortium at Cowles has been developing collaborative strategies in management, marketing, and performance.

In their Opening Acts experiment, one ensemble “opens,” or performs pre-show, for another’s concert, to increase the awareness of each company's audience to other groups. Curtain talks given by both artistic directors warmed up the audience. All companies' initial hesitation dissolved as the artists discovered this experiment to be a rewarding and easy way to collaborate. In-venue, post-performance mail-back audience surveys were used at a sample of the Cowles Center Consortium’s Opening Act performances to gauge audience reception of the opening act format and whether/how that affected their engagement with the main performance. About 70% had never heard of the opening company before hand, providing important first time exposure, and most felt it enhanced their experience. Just over half were more likely to follow the work of the guest company and liked that it provided something new. Most audience members enjoyed it, though some mentioned being surprised by the appearance of a guest artist on the program. While largely successful, this new idea was not without challenges. Cowles had to rely on other venues’ schedules and logistics. It required significant oversight and even costs, including artist fees, crew and some production expenses.

Number of Participants: It depends on the size of the venue, from 50 to hundreds. Our pilot program worked with a group of eight dance companies as featured artists and opening acts.

Is the program for kids? n/a

Nature of Audience Engagement: Audience members view the performance, including the Opening Act. Hopefully they are exposed to new Opening Act dance companies in a manner that motivates them to later attend full performances.

Location: At either our venue or venues in which companies are performing.

How Many Staff: Lead coordinator, full time (but again, for these two programs and other aspects of the project), evaluation consultant, artistic directors and managing directors from each company involved, and 20-30 volunteer members who participated in iDance.

Program Cost: These two programs were part of a larger project of coordinated activities among the eight companies, and marketed on behalf of Cowles and those companies. Opening Acts involved some fee support for the artists who opened; modest production costs for each act ($200 per act),

Cost for Program Participants: These two programs were part of a larger project of coordinated activities among the eight companies, and marketed on behalf of Cowles and those companies. Opening Acts involved some fee support for the artists who opened; modest production costs for each act ($200 per act) and some administration and marketing costs. Note that they were part of a full performance, which presumably would have occurred anyway. So the items above refer only to additional costs.

Past Iterations: This project spanned a year-long period. A detailed timeline for the entire project is available in Cowles Resource Guide on the Dance/USA website. See below for the link. Opening Acts was produced seven times.

What doesn't work? The Consortium saw success in its joint advertising, as well as the opening Acts, which was largely seen as positive to the artists involved. While ideally the group of artists want to continue, questions were about what can, and cannot, be accomplished through a consortium, and the importance of setting mutually beneficial goals and reaching clarity on other aspects of operations, in advance. Cowles’ work in cross-cultivating audiences and creating dance ambassadors reflects the need of the field at large to be creative and inclusive in its audience engagement methods and willing to share what it learns. Here again, the timeline was key: Cowles felt that a program with these components may require a multiyear commitment to ensure it is worth the entire investment. Cowles’ experiments with audience development leave lessons for the field in collaborating with dance companies, generating new audiences, and working with affinity groups.