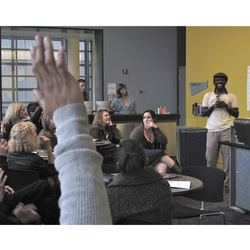 Time of Program: From the afternoon until after the performance; see below, as we tested different times.

Program Length: from 4 hours to most of the day

Program When Elaborate: The program is offered before, during and after a performance.

Goal: To determine if a critical pedagogy that is successful in visual arts be adapted to inform and educate audiences about dance.

With EDA support, Yerba Buena Center for the Arts in San Francisco created the pilot program Dance Savvy to build understanding of contemporary dance for a target audience of YBCA's visual arts and film/video patrons. This free educational program, based on YBCA’s visual arts program Art Savvy, is designed to encourage cross-disciplinary participation and to increase dance literacy. Dance Savvy uses Visual Thinking Strategies (VTS) as its central methodology. VTS fosters engagement through extended observation and inquiry-based curriculums. Also incorporated were social interactions and context from artists, as well as a kinetic learning element. Dance Savvy had two main components, which were accompanied by performances:
1. Pre-show Workshops. As the Pilot’s primary hands-on engagement tool, YBCA piloted four different Workshop models over the course of two Dance Savvy “semesters.” All had four elements in common, including an emphasis on deep observation, a central tenet of VTS; individual and group movement exercises and kinesthetic learning; contextualizing materials related to the accompanying performance and its themes; and the exploration of dance within a lively social context. Guest lectures, an option in the final, modular Workshop curriculum, were effectively incorporated when there was a fitting opportunity. (See the Template for the Dance Savvy Workshop below, as well as the Comparison of Models.)
2. Post-show Downloads. Inspired by the Walker Art Center’s post-show Speakeasy series, the download relies on a few basic parameters to set the stage for rich discussion: a limited number of participants, sensitive but casual facilitation by a moderator, and knowledge of VTS essentials over refreshments. Participants come away from Downloads with new perspectives and an enhanced sense of community. (See the Template for the Download below.)
Four different models were tested, and information about them appears in the questions below as well as in the accompanying documents (see the last question for links).

Number of Participants: A group of 12-20 is ideal, but the program might be modified to accommodate larger or smaller groups.

Is the program for kids? n/a

Nature of Audience Engagement: Audience members engage in a variety of ways. They participate in the workshops by listening, talking, and asking questions of the artist/experts and their peers, but also by doing movement phrases. They interact with each other over a meal between the workshop and performance. They attend the performance, and often choose to sit together since they've gotten to know each other a bit during the workshop. And finally, they share their reactions and ask questions at the post-show download.

Location: Onsite at our venue, using the theater, studio, gallery, and/or other informal meeting space.

How Many Staff: The staff included: a) the director of community engagement, director of performing arts and associated staff in assembling and running the Think Tank, at approximately 10% of each position; b) a consultant for Smart Night Out, at two hours per event; c) a group of interns and volunteers to support the event (one our prep plus 5 hours for the program); and d) the education and engagement specialist (about 10% of time). See the Resource Guide for more information (link is below). A Think Tank, which assisted with initial planning, was comprised of a separate group of people; see question about research.

Program Cost: Costs were around $27,000 for all iterations, which included $24,000 for artist fees, production and travel for the artists, as well as honoraria for speakers, plus around $3,000 in overhead. Refer to the resource guide on the EDA portion of Dance/USA’s website for more information (see below for link).

Cost for Program Participants: Costs were around $27,000 for all iterations, which included $24,000 for artist fees, production and travel for the artists, as well as honoraria for speakers, plus around $3,000 in overhead. Refer to the resource guide on the EDA portion of Dance/USA’s website for more information (see below for link).

Past Iterations: See above, the project was completed multiple times during our EDA grant period, using different timing and arrangement of the activities.

What works? YBCA felt that the download was the sleeper hit of the Dance Savvy Pilot. The effect of communal discourse after a shared artistic experience was powerful and revealed how engagement with dance can go deep with minimal resources. Additionally, Downloads were an excellent platform to revisit themes and topics addressed in the preceding Workshop. YBCA shares four key lessons from the Pilot, which should be useful to other organizations that are considering adapting it. If given the final, adaptable, modular curriculum, other institutions will be able to replicate Dance Savvy, preferably in consultation with YBCA staff, who can help tailor the program to their specific situation. YBCA’s lessons about the overall program are as follows: 1. Your audience knows less than you think. Making dance-goers aware of the rich, often-underappreciated evolution of a performance—from idea generation to final curtain—is extremely valuable. When audiences, especially the “uninitiated,” understand that dance does not occur in a vacuum and that an entire spectrum of aesthetic thought and intellect goes into the creation of work, greater appreciation follows. 2. Participant preparation and program location matters. YBCA had a revelation that getting audiences primed for their arts experience yields tangible, real results. They tested a range of simple icebreaker exercises, all of which succeeded in readying the dance viewer’s physical body for an aesthetic encounter. When participants were given a pocket-sized handout with the three VTS questions to keep in mind when viewing dance work, responses were quite positive. In short, getting both experienced and novice audiences alike to relax will assist in their ability to engage physically, intellectually, and emotionally with the work. In addition, YBCA learned that the physical setting, timing, and duration of Dance Savvy were almost as integral to the user experience as the program’s content. 3. Many audience members need permission to access the world of dance. According to staff, “what was arguably more illuminating was that many dance novices felt the entire discipline/medium was 'off-limits' to them; that dance simply was not 'on their radar.'[...] upon our repeated entreaties to embrace the possibility of discomfort and confusion with contemporary dance, we were rewarded with increasingly open minds." In communicating the subjectivity and the myriad possibilities for interpretation about contemporary dance, participants’ anxiety about “getting it” was alleviated. A participant who was a visual artist and scholar remarked that because of Dance Savvy, she could now “see” the world of dance and performing arts open up to her, where before it was opaque. Related to the idea of permission, YBCA notes, is the problem of vocabulary and language. “Frequently, we found our Pilot group struggling self-consciously with participants perceived lack of tools to describe dance and movement. They felt tongue-tied to convey their thoughts and observations as eloquently and viscerally as the medium itself.” A workable solution was the “reminder that they already have the tools they need to talk about dance—they are just nestled in different parts of the brain. Once our group got over the initial awkwardness of admitting a less-than-encyclopedic knowledge of the form—and using what they did have—we enjoyed more fruitful, relaxed, free-flowing discussions and dialogues.” 4. Approach dance engagement from many angles. Based on this experience, YBCA feels that any kind of dance engagement programming should be multi-faceted, multi-modal, and not overwhelmingly didactic—but instead an integrated curricular model. Dance Savvy—which, as shown in this report, has had such a significant, profound impact on YBCA’s organization.

What doesn't work? YBCA is still considering the balance in contextualization and observation/interpretation within the curriculum. YBCA wanted to explore dance through deep observation, without always providing explicit explanations for what a dance piece means. They were also committed to investigating different, creative ways to prepare the body and the mind for experiencing a work. While these approaches were successful, participants requested more contextual information; for example they were particularly curious about was how a dance season is curated.

Past Research on Program: Research and development were key to creating and testing this new model. Prior to the program’s launch, a Think Tank held in May 2010 was integral to helping YBCA “envision a variety of creative approaches for implementing what was, at that time, a relatively undefined concept.” Working across departments, with YBCA’s Community Engagement and Performing Arts staffs, the collective knowledge and creativity brought to the table from two different points-of-view was invaluable. Then, after each Dance Savvy activity, YBCA conducted post-event online surveys to gauge whether or not participants’ expectations were met, how the program might be improved, and participants’ overall satisfaction with the Dance Savvy program, as well as summative questions about attitude and behavior change as a result of participating in the Dance Savvy program. YBCA documented the changes it observed among Dance Savvy participants, as evidenced by its research and staff observations. Staff was inspired by the Pilot’s ability to change the participants’ attitudes toward contemporary dance, with the evaluation results noticeably improving, when 55% felt “a lot better equipped” to appreciate contemporary dance in the future. Throughout the Pilot, participant retention rates and satisfaction levels remained high, as did their interest. For example, one participant who was a visual artist felt that through Dance Savvy the “veil has been lifted” to reveal the world of performance. During the pilot, YBCA witnessed the “creation and flourishing of an invested community of participants that grew dramatically more curious, open, and empowered to investigate new dance forms,” according to staff. This close-knit group sat together at performances, interacted during Workshops and Downloads, and had animated discussions during shared dinners. Social aspects became more beneficial and YBCA expects that these connections will continue. Finally, the participants’ attention span was held throughout the events, even when they were held on the same day. To test this pilot, twelve participants in each workshop were exposed to the work of dance artists (including Ralph Lemon, Sankai Juku, Jess Curtis/Gravity, and Lemi Ponifasio/MAU). Learning about concepts such as time, space, and line, the participants were encouraged to form opinions, deepen critical thinking, and confidently express their evaluations. It was crucial that curriculum remain flexible and modular; a single, rigid curriculum would put undue limitations on Dance Savvy. See also the EDA report from WolfBrown Engaging Dance Audiences: Summary Assessment of Grantees’ Engagement Practices, Pages 30-31. The link is below.

Continuing Program? Yes, the organization has continued the program and assigned dedicated staff to run it.

YBCA noted the amount of human and other resources needed to pilot a new program. It took considerable time to research, plan, implement, and manage a pilot of this scope. In institutionalizing the program, YBCA would likely need to identify a single staff member who will assume a primary role. Dance Savvy will become a core, foundational engagement program for YBCA audiences to explore visual art and performance.

Event Formats Workshops: for audiences to learn something about the art form or art Participatory Engagement Methods: involving the audience in activities such as dancing or choreographing Dance 101 - How to introduce contemporary dance to the novice adult

Online Engagement Both online and in person