Celebrity Series of Boston (CSB) was established in 1938 and has evolved into one of the top presenting organizations of New England area. Presenting over 50 multi-cultural and international artists each season, Celebrity Series has presented iconic artists such as Twyla Tharp Dance, the Merce Cunningham Dance Company, and the Joffrey Ballet. In addition to performances, Celebrity Series strives to make the performing arts available to the Boston community through educational programs, with a focus on children and families that otherwise would not have access to such performing arts opportunities. 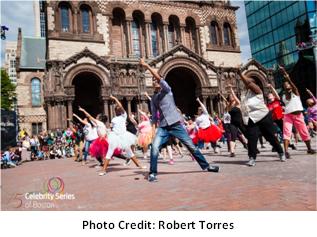 Describe your organization’s mission and its work in 3 adjectives. Please explain the adjectives you selected.

The mission of the Celebrity Series is to present world-class performing artists who inspire and enrich our community.  We believe in the power of excellence and innovation in the performing arts to enrich life experiences, transform lives, and build better communities.  We envision a community of Greater Boston where the performing arts are a valued, lifelong, shared experience – on stages, in schools, in homes – everywhere.

The three adjectives that best describe the work and values of the Celebrity Series are:

• World class – We at Celebrity Series hold our work to the highest standards and we pride ourselves in delivering world class, quality events to our audience.  Now celebrating our 75th Anniversary Season, we have had a long tradition of bringing the very best performing artists from around the world to Boston – from hosting the Ballet Russe de Monte Carlo in the 1940’s, Sadler’s Wells Theatre Ballet in the 1950’s, to introducing Rudolf Nureyev and the young Luciano Pavarotti to Boston in the 1970’s. Without Celebrity Series, the Boston audience would have to travel to New York or Europe to enjoy the same world class artistic experience.

• Variety – Variety of and within performing arts genres have been the keystone values to any Celebrity Series season.  From a recent audience survey, we learned that as many as 75% of Celebrity Series subscribers purchase events cross-genre.  As one of the largest multi-disciplinary presenters in New England, we aim to present a diverse lineup of events each year and our audience has come to expect the Series as their one-stop shopping destination for their cultural needs – from classical music to jazz, folk and contemporary, ballet and modern dance, and speakers and more!

• Transformative – We believe in the power of the performing arts and the transformative experience it provides for our audience and artists alike.  From seeing a young child being completely engaged at his/her first dance workshop to hearing the amazement expressed by a long time subscriber having attended his/her first modern dance concert, we learn time and time again how we play a role in shaping our audience’s lives, values, and the community at large.

What have been some of the most popular presentations at the Celebrity Series of Boston and what made them so successful?

To celebrate our 75th Anniversary Season, we presented two large scale outdoor public art events.  Paying tribute to our founder Aaron Richmond who was a pianist turned impresario, we launched our 75th Season with Play Me, I’m Yours!, an art installation project conceived by British artist Luke Jerram.  Seventy-five donated upright pianos were decorated by 75 local artists, and were placed all around the street corners and public spaces in Boston for three weeks in the fall of 2013.  Over 110 local arts, cultural, and community organizations partnered with us to make the festival a reality.  Over half a million Bostonians stopped to play, listen, and share music with their fellow citizens, and over 1,700 photos and videos were posted by the public online.  Impromptu and scheduled concerts, sing-alongs, and jam sessions occurred every day.  The street piano festival received unprecedented press coverage and for three weeks, the entire city of Boston became the backdrop of a city-wide musical collage, with a variety of music coming through literally different street corners and everyone and anyone became an artist even if for just a few minutes!

For our season finale, we presented three performances of Le Grand Continental, a free outdoor public dance event created by Montreal choreographer Sylvain Émard.  For two months, 110 volunteer dancers, ages 9 to 73 from 11 Boston neighborhoods and 25 surrounding communities rehearsed twice a week and learned a complex and infectious 30-minute dance.  For the performance weekend in May 2014, our 110 dancers gave it their all, attracted a weekend audience of over 5000, and turned Boston’s Copley Square into an outdoor dance party.  But most important, the impact on the dancers and our community was far reaching, and was best described by a testimonial from one of the dancers.  “The most important aspect of the experience was building community among the dancers.  We have too few opportunities in life to reach beyond our neighborhood and work circles to engage with others.  By bringing so many people together for a common purpose, Le Grand Continental demonstrated that diversity cannot be achieved by talking, it is appreciated by doing things together.” 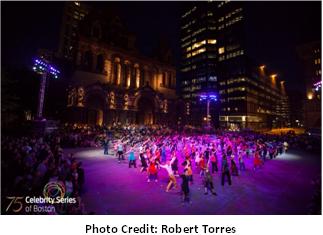 How is the Celebrity Series of Boston reaching out to make the performing arts available to all within the Boston community?

The Celebrity Series’ community program Arts for All! engages thousands of children, teens, families, college students, and arts-loving citizens in summer camps, artist residencies, and community concerts year round.  With ongoing partnerships with close to 100 partner schools and community organizations, Arts for All!  reaches over 10,000 individuals by offering a variety of artistic experiences in schools, at community-based venues, and at the City’s greatest concert halls.

With Play Me, I’m Yours and Le Grand Continental this season, we have also learned that public art projects – though costly to present and complicated to implement – are some of the most effective tools to engage the public and encourage our community to take part in the arts.  Through Play Me, I’m Yours, we saw firsthand how people from all walks of life just could not resist the temptation to sit down at a piano, tinker on the keyboard, or stop and listen to the music on their way to work.  At our first performance of Le Grand Continental, hundreds of people huddled under their umbrellas in the pouring rain in the middle of Copley Square, waiting for their friends and loved ones to perform the dance routine they worked so hard on while missing family dinners and social gatherings most evenings for two months.  All of this reminded us as an arts presenter the role we play in our society, and how we can serve as an important catalyst by providing transformative arts experience to our community, especially to those who cannot afford it or who least expect it.

To quote another testimonial from a Le Grand Continental (LGC) dancer: “When I auditioned to be a member of LGC, Celebrity Series choreographed street dance of local citizens, I expected to meet people beyond my usual sphere, learn cool dance steps, and have fun … LGC has exceed all of those expectations ... When we immerse ourselves in something, anything, we appreciate and respect it more.  The Celebrity Series is investing significant time, money, and personal energy to present LGC.  In exchange 112 people are enjoying an experience that enhances our relationship to an art form.  Hopefully, the thousands more who attend will gain fresh perspective on art in general and dance in particular.”